Just like we have written in the previous post we were not prepared to go on a bicycle trip, but we went anyway. And it turned out great! Our first obstacle was getting out of Kuala Lumpur (KL). For that we decided to take the train since the cycling in KL is not very pleasant. The second issue was where to go. It seems like a stupid problem, but still, there were a lot of options (travelling on east or west coast) and the only thing we knew, was that we want to use the roads with less traffic. So we asked for advice our host Akmal, where we were volunteering for a month. With the grin on his face, he suggested to cycle to Frasier hill and continue towards Cameron Highlands. He promised us that these places are really beautiful and worth a visit. 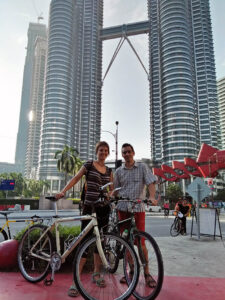 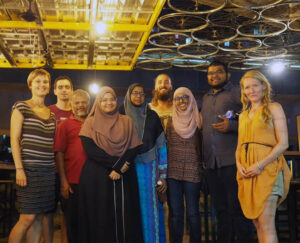 Our “taking off” started with a missed train. We got 2 extra hours at the train station. The real fun began when arrived at the suburb of Kuala Lumpur at 2 pm (when the sun was super strong) and tried to pack the backpacks on the bikes. It was a challenge! Luckily Ajda bought a lot of ropes (normal and elastic one) so it took us “only” 40 minutes to figure that out. It was so bad, people started filming us because we were becoming attraction there. And hey, who on Earth would start cycling in this heat, right?!?! 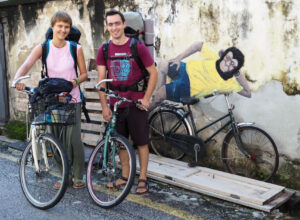 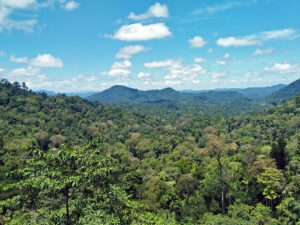 The other “tiny little” detail was, that after having small breakfast we didn’t have any food except two oranges and 10 crackers. The plan was to have some nice lunch on the way of 40 km and 1 km of altitude towards Frasier hill. Oh, how wrong were we! We started with unbeatable enthusiasm, pushing pedals on a nice and sunny day. It was so hot that the clothes were completely soaked with sweat after a couple of minutes of cycling. But we were surrounded by mighty jungle and all the sound that comes with it! After a couple of miles, hunger started to knock on our stomachs. We stopped and checked the map in more detail. Surprise, surprise! There were not a single village or a house on our way! Only jungle! The good news was that our water supply was sufficient. We carefully eat our food, hiding it from the monkeys which were curiously jumping from the trees to the road to check what is going on. 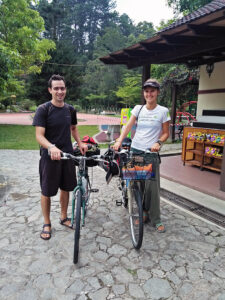 By force of pure will and initial enthusiasm (also the fact that we were too hungry and scared to sleep our first night in the pure jungle in our hammocks) we came on top just before the dark. We empty the first store of all the food we could found and made a junk picnic in front of it. And yes, we learned our lesson fast, so we always checked our path and had some extra calories packed.

The next days were full of nice rides through the jungle and palm plantations. The road was much flatter, there were delicious food, accommodation and drinks available by the road. What more we could wish for? Except for some clouds in the sky to cool the heat. 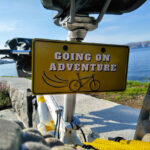 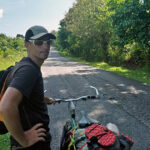 The beginning – how it all started 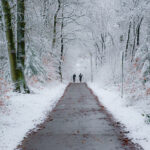